These past few months have gone in a flash of an eye. While on summer break I have been busy with clubs, planning for a Camp YEWA (Young Empowered Women's Alliance) and taking a few vacations between it all. With school starting back up I’ve been readjusting to having a school schedule, continuing to plan for Camp YEWA, and enjoy some hidden treasures Comoros has to offer.

While nothing to crazy has happened, in the sense of strange stories I continue to integrate into my community and say yes to any and all opportunities I am handed. That includes a brief experience of trying to grate coconuts and ultimately being laughed at and told to just watch, getting a crash course in French because of Comorians visiting from France, and me introducing smoothies to people in my village. Besides these few interactions nothing too crazy has occurred in village.

Besides enjoying summer break in my village I have also been given a chance to take two different trips, one to another island called Moheli. Well known for its natural resources such as whales, turtles, and waterfalls. And the other to Madagascar. Both have been incredible and different experiences.

In Moheli, I spent a few days with some of my friends from my village and other PCVs and visited around the island. The first day we arrived it turned out to be National Turtle day so we hoped into a car and headed off to Itasmia, known as Turtle beach, but I'll explain that later. It was quite an experience, and we even saw a speech from the President of Comoros, while seeing some turtles return to sea. The next morning I woke up early to head to Mirangoni, which is located on the far west side of the island. There we visited my friends family and the waterfall of the village. The next stop was winding through the mountains until we reached Niomachouia, a beach village. It was so a beautiful place, it share similarities to beaches in the Caribbean. The following day was an adventure to Itsamia, and after a 5am bus ride, waiting for a taxi we finally arrived 4 hours later to Turtle Beach. This beautiful beach is a safe haven for sea turtles to come and lay their eggs. Around 9pm at night we went crawling with our guide through the sand to locate a turtle who just begin laying her eggs. Being given a chance to watch them lay their eggs was quite an experience that I will always remember. The next morning we packed our backs and departed for the capital. The last day in Moheli was spent just relaxing and visiting the capital. That following morning I head early to the airport where I wait for a few hours before finally flying back to ngazidja. Once I arrived I met with some friends and we took a mini tour of the island. In the afternoon I returned home for the night.

The following week was quite laid back, and I just hung around in village as the week following I was departing for a vacation to Madagascar. My trip to Madagascar was incredible. While I was unable to visit all the places I was hoping to, I still greatly enjoyed visiting around this massive island. On my first full day I spent 12 hours traveling by bus to the far west side of the island. The intent was to visit Tsingy, a stone forest. While that did not end up happening, I did get to visit the famous Baobabs, cook and eat some local crab, and watch the sunset over the beach. All in all the two days spent in Morondava were quite successful, and I was able to really embrace the Malagasy life experience. After two days in Morondava I hopped back on the bus to head to Antananarivo. In the capital I was able to enjoy some food, catch up with some old acquaintances, make new friends, and just relax for a few days. While nothing too crazy special happened in Tana, it was quite a nice trip. I was able to just relax and see some key spots around the city. It was also a very difference experience, as while there are some similarities to Comoros, some things are quite different. These differences made the trip just that much more of an adventure.

Upon returning to Comoros I spent some time in village, before heading off to our Mid-Service on Anjouan. For the first few days I visited around parts of Anjouan I had yet to see. I was able to see some friends, visit a waterfall, and enjoy some beach time before a week of Mid-Service Training.

The training was a great time, as we were able to work on literacy based projects, and even learned how to make books from rice sacks (new final project idea). It was also a time to just catch up as a group and enjoy some time in the hotel.

Upon returning back to Grande Comore I spent as much time preparing for school, showing people around my village, and visiting some new spots on the island.

Finally as October rolled around some big activities started to take shape. Firstly was a library workshop my counterpart and I partook in. This week long conference helped for us to establish some goals for our library, and even ideas of some things to do in said library. On top of this I spent some time working on completing my grant application, and I’m happy to say after some weeks of worry,

It has been approved and is currently in the funding stage. In village I’ve been enjoying being back home, visiting around, and looking forward to fruit season finally beginning.

Otherwise things have been just chugging along. School is going well, my clubs are still exciting (especially the kids club), things are starting to come together for Camp YEWA, and my last year in the Comoros is looking quite busy but full of many experiences.

Posted by Unknown at 3:46 AM No comments:

After months of planning, working hard to establish the space, to painting, to putting the books up, finally I can say the Library of Hambou is now open for business. And of course non of this would've been possible without the help of my amazing community members, friends, and students.

With all that being said, please enjoy pictures of our adventure in creating the Library of Hambou. 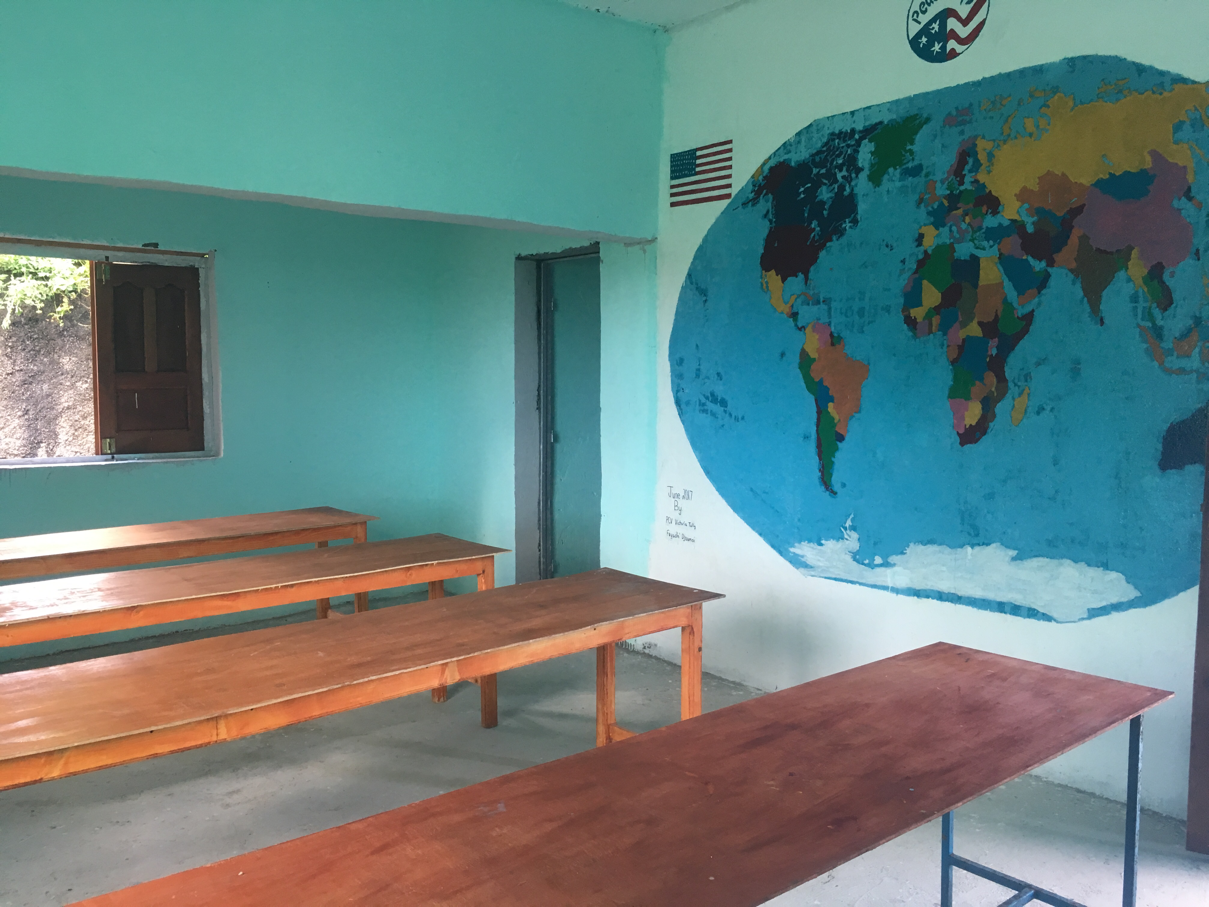 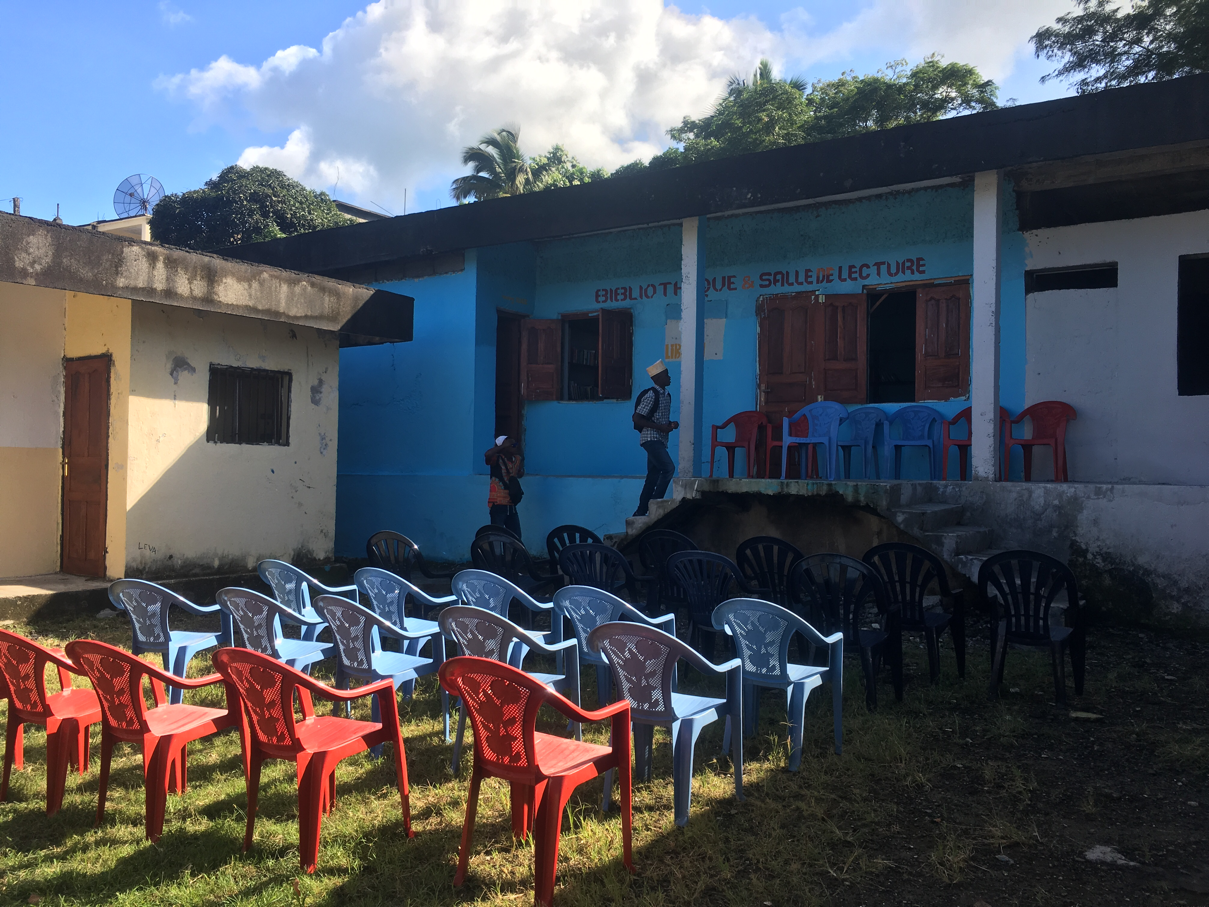 Opening ceremony
After about 4 months of hard work the library has now become open to the 5 surrounding villages, and schools.

I want to thank everyone who supported the library in every way, and all those in my community who helped make this become a reality.

Lest's see what possibilities will come from the Library of Hambou.
Posted by Unknown at 1:13 AM No comments: